True wireless earphones have come a long way in a short time, and premium options today have overall battery life that rivals that of full-size headphones, along with features such as active noise cancellation. Today’s premium options such as the Apple AirPods Pro and Sennheiser Momentum True Wireless 2 offer effective noise cancellation and great sound quality, but are definitely priced on the higher side at Rs. 25,000.

A little late to the game, Samsung recently launched its latest true wireless earphones, the Galaxy Buds Live. The first true wireless earphones from the brand to feature active noise cancellation, the Galaxy Buds Live is also considerably more affordable than competition from Apple, Sennheiser and Sony, at Rs. 14,990. Another rather unique aspect of these earphones is the design. The bean-shaped earpieces are eye-catching, but is this radical new style effective for everyday listening and active noise cancellation? Find out everything you need to know about these earphones in our review.

When early leaks and rumours suggested that Samsung’s next true wireless earphones would look like beans, a lot of people (including me) scoffed at the idea, and thought it was too ridiculous to implement in a production-scale headset. Those rumours turned out to be true though, and the Galaxy Buds Live earpieces do in fact resemble beans. This might appear to be an odd shape at first glance, but they actually sit quite well in the ears, and look elegant when in place.

The Samsung Galaxy Buds Live is available in three colours – black, bronze, and white, matching the company’s latest flagship phones, tablets, and wearables – and all have a glossy, reflective finish. The black of my review unit is, in my opinion, the best looking of the three, although many might like the more unusual bronze colour option.

Whatever colour you pick, you get a matching charging case. which is compact, glossy, and features USB Type-C fast charging as well as Qi wireless charging. The earpieces latch into place in the case magnetically, and a small indicator light tells you the approximate battery level of the case. You can see the exact battery level of the case using the Galaxy Wear app, but more on that later.

It’s hard to imagine functional active noise cancellation on earphones with anything short of a proper in-canal fit, so I was definitely curious to see how ANC would work with the unique design of the Samsung Galaxy Buds Live. There is a specific way to insert the earphones, which is described through a short tutorial graphic in the Galaxy Wear app. Putting the earphones on the correct way ensured better passive noise isolation than with earphones designed for an outer-ear fit, but it didn’t quite come close to what a good pair of in-canal earphones can offer. 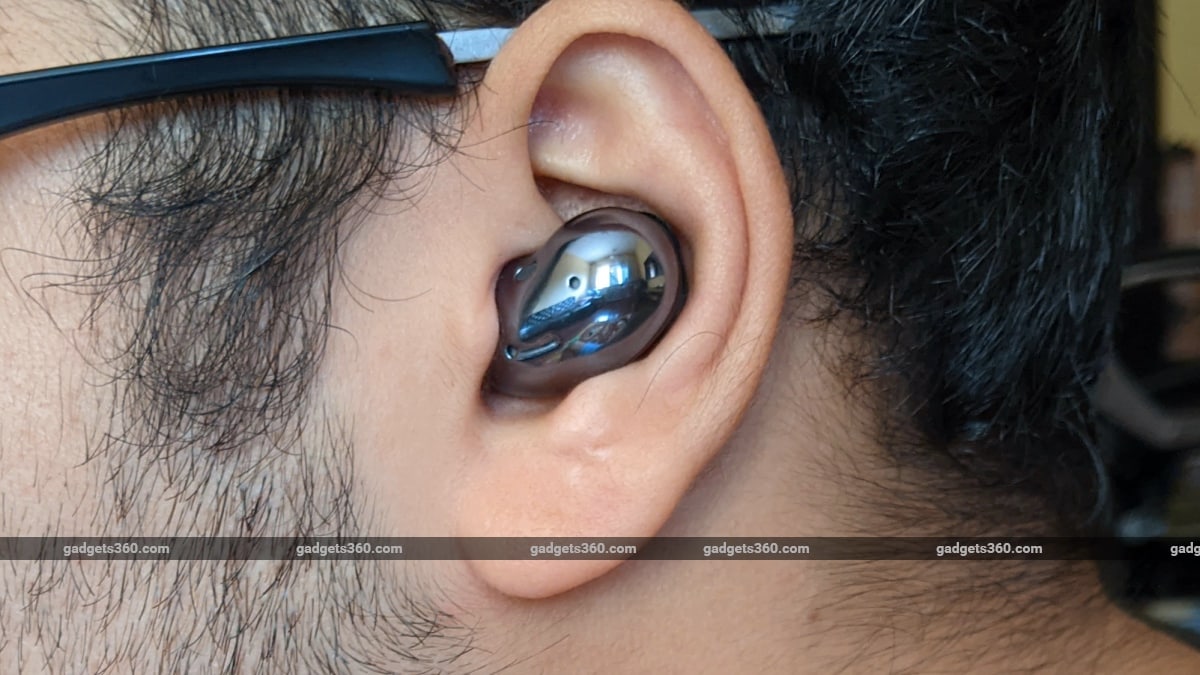 Although a bit tight in my ears, the fit of the Samsung Galaxy Buds Live was very secure

The fit was a bit tight in my ears, and I needed to take the earphones out every 30-45 minutes just to relieve the pressure a bit. There are rubber buffers on the upper part of the earphones that prevent the hard parts from touching your outer ears, which is a useful touch in my opinion. Fortunately, it’s a very secure fit, and the earpieces are unlikely to fall out even with heavy movement and activity.

The Samsung Galaxy Buds Live has touch sensors on the upper parts of the earpieces, and simple taps control various functions. A single tap plays or pauses music, a double-tap skips to the next track or answers and ends calls, and a triple-tap skips to the previous track.

The long-press function can be customised using the Galaxy Wear app to either control active noise cancellation, invoke the default voice assistant on your smartphone, quickly launch and play music from Spotify, or control the volume (left for volume down, right for volume up). By default, this also declines calls if used when your phone is ringing. You can also deactivate the touch sensors altogether if you choose. It’s a good set of controls, and the customisability of the long-press function is something I found particularly useful.

The Samsung Galaxy Wear app supports the Buds Live, with some options and settings similar to what we saw with the Galaxy Buds+. The big difference is a switch for active noise cancellation.

Other useful features in the app include graphical battery indicators for each earphone individually and the case (the latter is visible only when the earphones are in the case with the lid open), and equaliser settings. You can also activate an experimental ambient sound mode, update the firmware, and more. The app is excellent as before, offering just the right number of controls without being too complicated. 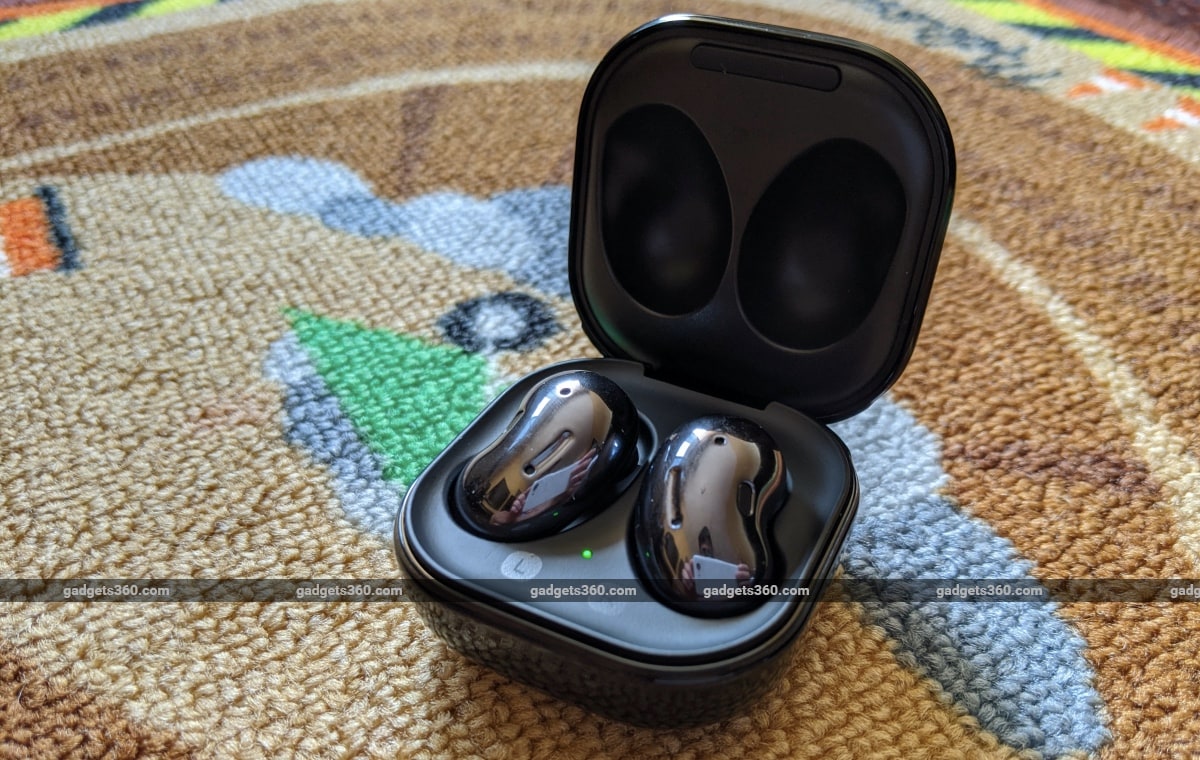 The Samsung Galaxy Buds Live uses Bluetooth 5 for connectivity, and supports the SBC, AAC, and Samsung’s proprietary Scalable codecs. The earpieces weigh 5.6g each, while the case weighs around 42g. I was able to use the earpieces of the Samsung Galaxy Buds Live for around 5 hours, 30 minutes on a single full charge with active noise cancellation enabled much of the time. The case was able to recharge the earphones just under thrice over, for a total battery life of around 20 hours per charge cycle.

Samsung’s true wireless earphones leading up to the Galaxy Buds+ have largely been good, but with the Galaxy Buds Live, the company seems to have taken a small step backwards. Although sound quality isn’t bad, and the Scalable codec does help to get a bit more out of these earphones, the overall usage and listening experience was underwhelming, in my opinion.

I used the Samsung Galaxy Buds Live primarily with a OnePlus 7T Pro McLaren Edition using the AAC Bluetooth codec, but also tested these earphones with a Samsung Galaxy Tab S6 which supports the Scalable codec, and with an Apple MacBook Air for videos and calls using the AAC codec.

As I usually do these days, I started the Samsung Galaxy Buds Live off with Tidal Masters, listening to Chunky by Bruno Mars. This lively track started off feeling wholesome and exciting, but it revealed some flaws in the sonic signature and began to feel a bit shrill when the track got busy. The sound wasn’t particularly clean, and it often felt as though too much was going on for the Galaxy Buds Live to keep pace with. 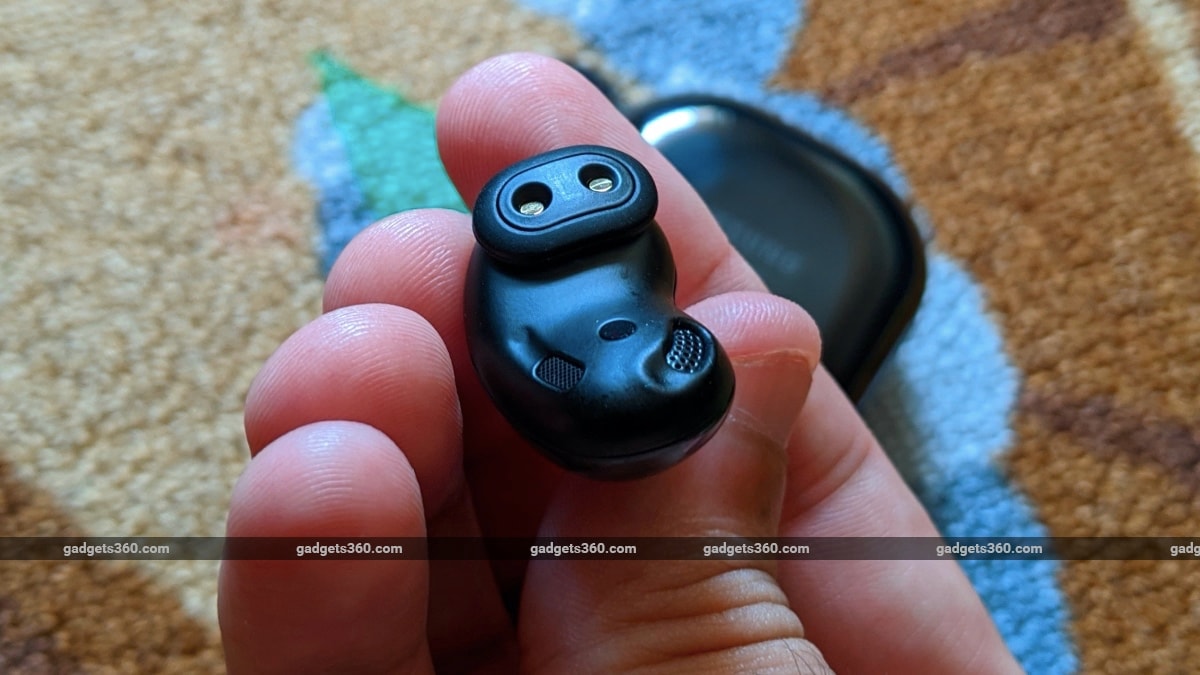 The insides of the earpieces have rubber buffers, which is a useful touch

Listening to the much gentler Ain’t No Mountain High Enough by Marvin Gaye and Tammi Terrell negated the issue of too much going on, and this track also allowed some detail to shine through. The soundstage is spacious, and the somewhat open fit works well to give the sound some atmospheric sense. However, the treble sounded even shriller than when listening to Chunky, and I also heard a bit of roughness that made the highs sound almost like distortion.

Switching to compressed audio with Spotify strangely made the Samsung Galaxy Buds Live sound a hint better, but not for a particularly good reason; it seems that the high resolution Tidal Masters tracks were overwhelming the earphones, which wasn’t the case with compressed audio. Listening to the fast-paced and bass-happy Don’t Call Me Baby (Mousse T Remix) by Madison Avenue, the bass took centrestage and didn’t let the shrill highs push through.

In these conditions (which is also how most people actually listen to music), the Samsung Galaxy Buds Live sounded decent, with the detail and soundstage adding some character to the sound. That’s not to say that the Galaxy Buds Live sounded exceptional, and much of that has to do with the odd design and fit. Sound quality is just about decent, but options such as the Lypertek Tevi sound considerably better at half the price.

Active noise cancellation on true wireless earphones can be pretty good, with the Apple AirPods Pro and Sony WF-1000XM3 setting the bar quite high. Samsung doesn’t quite match up on the ANC front with the Galaxy Buds Live. The reduction in background noise makes too small an impact to really matter.

You can definitely hear a slight reduction in noise, but the imperfect fit and general lack of finesse make for an average overall experience. There was just a slight reduction in atmospheric sound, while specific droning tones such as an air-conditioner or ceiling fan could still be heard quite loudly. ANC just about works and could be useful in some situations, but if this is a key factor in your purchase decision, the Samsung Galaxy Buds Live may not be the best choice.

The earphones use Bluetooth 5 for connectivity, which is stable at a distance of up to 10 feet with clear line-of-sight between the earpieces and source device. Moving into a different room, or even a piece of furniture being in the way caused some connectivity issues. In contrast, the RHA TrueConnect 2 offers a much more stable connection for around the same price.

The Galaxy Buds Live is decent for calls, but doesn’t quite match up to the RHA TrueConnect 2 and Jabra Elite 75t in terms of connection stability and voice clarity. 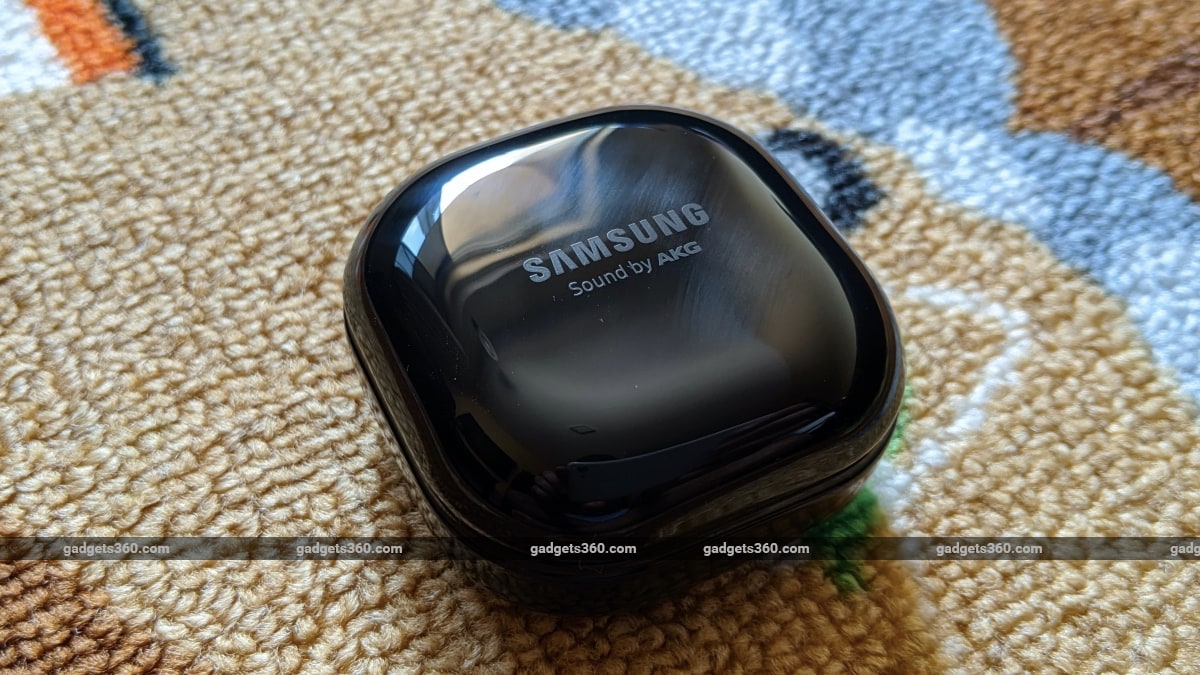 Battery life isn’t too bad, with the earpieces lasting around 5 hours, 30 minutes per charge

Although Samsung’s range of true wireless earphones has been pretty good thus far, the Galaxy Buds Live is a bit of a fall from grace for the Korean company. It isn’t bad by any means, but the Samsung Galaxy Buds Live simply doesn’t offer enough other than style to justify its Rs. 14,990 price tag. Much of its lack of capability has to do with its rather radical design; the earphones look and feel great, but this design and fit simply don’t make for very good sound quality or active noise cancellation.

There is some fun to be extracted from these earphones, with most popular genres sounding decent enough, at least when using common streaming services, and there’s also plenty of detail to be heard. However, shrill highs, a less than ideal passive seal, and barely discernible active noise cancellation bring the Samsung Galaxy Buds Live down a bit.

It might be worth checking out the Jabra Elite 75t in this price range, which is expected to get ANC through a software update in the coming weeks. If you think you can do without active noise cancellation, the Samsung Galaxy Buds+ is a less expensive and still very capable option that plays just as well with Samsung smartphones.

Which are the best truly wireless earphones under Rs. 10,000? We discussed this on Orbital, our weekly technology podcast, which you can subscribe to via Apple Podcasts, Google Podcasts, or RSS, download the episode, or just hit the play button below.