Andhra Pradesh is bracing for more heavy rainfall over the next 24 hours – IMD Hyderabad has warned of thunderstorms along coastal regions in the state – after a deep depression in the Bay of Bengal crossed the coast near Kakinada on Tuesday, causing widespread flooding and damage across both the state and Telangana, and leaving at least six people dead.

The Chief Secretary to Chief Minister Jaganmohan Reddy wrote to senior district and police officials on Tuesday, urging them to be on “high alert”.

Massive flooding and waterlogging are likely to occur in low-lying areas. Uprooting of trees and electricity poles are also expected and could cause disruption to normal activities, the Chief Secretary, Somesh Kumar, said in his letter

“Reservoirs, tanks and streams may overflow and cause low bridges and causeways to be flooded, posing threat to traffic and people. District Collectors and SPs (Superintendent of Police) are requested to put respective district administrations on alert and strictly follow flood protocols communicated earlier,” Mr Kumar wrote.

“Special attention needs to be paid to low-level bridges and causeways,” he reiterated, adding, “All traffic and pedestrian movement has to be strictly prohibited to ensure no loss of life.” 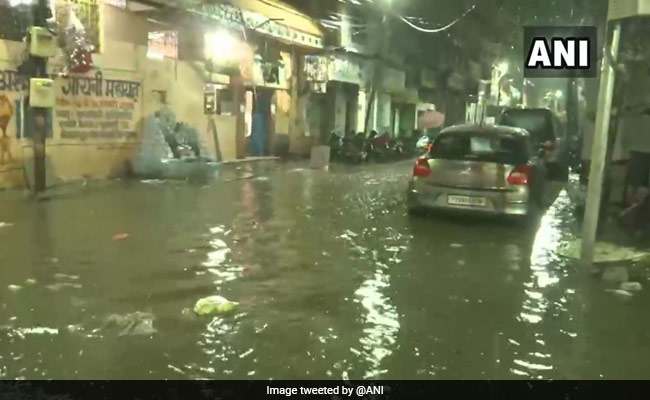 At least three have been killed in Andhra Pradesh and another three in Telangana after continuous rain over the past two days. Andhra Pradesh has also reported damage to property, according to news agency PTI.

Heavy rain – from 11.5 cm to 24 cm – was recorded at more than 100 places in the state, primarily in East and West Godavari, Srikakulam, Vizianagaram, Visakhapatnam and Krishna districts.

Highways and roads disappeared underwater and people had to wade through waist-deep floods to safety as several local rivers were in spate. Trees were uprooted and power lines were cut.

Thousands of acres of farmlands were also left flooded, news agency ANI reported. A video shared online by the agency showed dozens of people hanging on to a rope as they try to cross a heavily flooded road, which looks more like a river in full flow.

In Telangana 14 districts were hit; traffic came to a standstill as heavy rain flooded roads. Three people were killed after walls collapsed at two different locations. Worried over more such tragedies, the Hyderabad municipal corporation has asked 150 vulnerable structures to be vacated.

With input from ANI, PTI