Rupee Bounces From Asia’s Weakest Currency On Massive Stock Inflows, due to a recovering economy and expansive budget

The rupee has gained 0.6 per cent this year against the dollar and it could keep rallying

The rupee is turning a corner, as massive inflows into the country’s stock markets help the currency break past the central bank’s intervention barrier. Asia’s weakest currency last year is now among its best performers. The rupee has gained 0.6 per cent this year against the dollar, and there are signs it could keep rallying.

A recovering economy and an expansive budget are luring global funds to India’s equities, with investors buying almost $4 billion of stocks this month, the most in Asia’s emerging markets after China. That’s posing a challenge to the Reserve Bank of India, which has been intervening in currency markets to keep the rupee competitive. 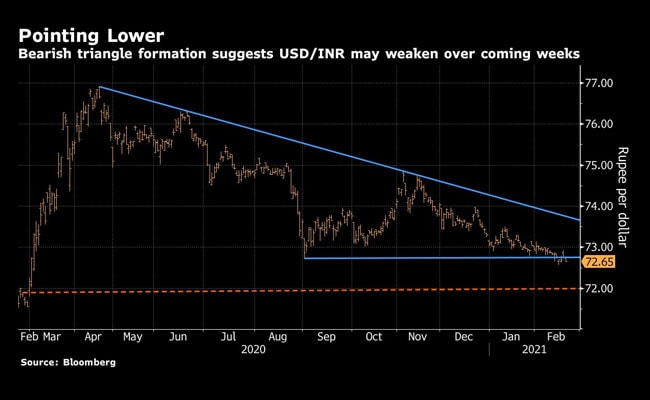 The rupee rose to 72.57 per dollar last week, its highest since March. That’s likely to clear the path for its advance to 72 per dollar, technical charts suggest. Analysts surveyed by Bloomberg see the currency hitting that level by the fourth quarter.

Moreover, bullish momentum for the rupee could pick up if the exchange rate breaks past the 100-week moving average barrier that’s held since April 2018.

Impetus for more gains could come this Friday with the latest economic growth figures. Economists expect the data to show that India exited a recession with a 0.5 per cent expansion year-on-year in the fourth quarter.

The RBI’s accumulation of dollars in 2020 had held back the rupee as it built up record foreign reserves. Nomura Holdings Inc. estimated that the central bank purchased $126 billion from the currency market in 2020, or about 4 per cent of its GDP, mostly offsetting inflows.

The tussle between the central bank and bullish traders though is set to continue, with Governor Shaktikanta Das signaling last month that the RBI won’t relent on building up its foreign-exchange reserves.

“While we may see INR strengthening further in the near-term on supportive inflows, we are cautious on the medium-term outlook,” said Divya Devesh head of Asean and South-Asia FX research at Standard Chartered Bank in Singapore. “Rising crude oil prices and a widening trade deficit will likely emerge as important headwinds as the year progresses,” he said.

Below are the key Asian economic data and events due this week:

HighlightsPunjabi Kadhi is a popular besan-based curryPunjabi Kadhi Pakora is best paired with riceLearn how to make authentic Punjabi Kadhi with this recipePunjabi cuisine...
Read more

Superman Reboot in the Works at Warner Bros. With Ta-Nehisi Coates...