Petronas Yamaha SRT rider Fabio Quartararo beat Pramac Ducati’s Jack Miller in the final seconds of qualifying by just 0.222s, while Danilo Petrucci on the factory Ducati starts third in his best qualifying session in the season so far. 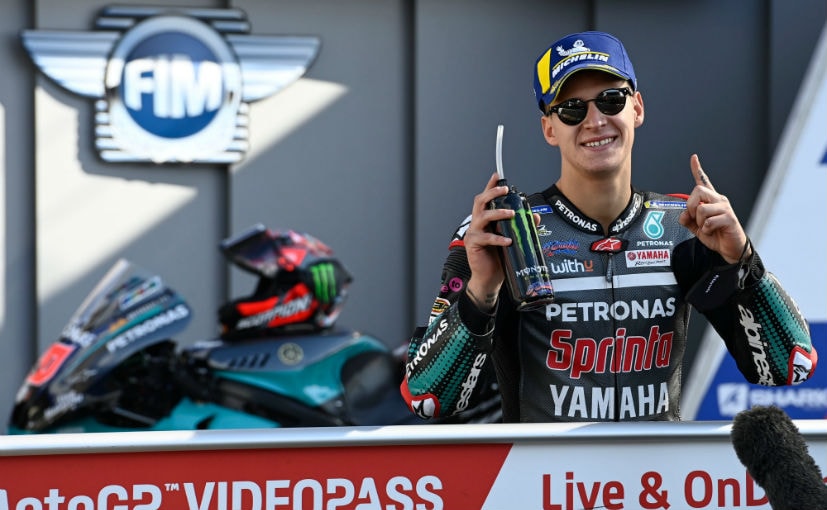 Petronas Yamaha SRT rider Fabio Quartararo secured a flawless pole position in the 2020 French Grand Prix at Le Mans, ahead of Ducati riders Jack Miller and and Danilo Petrucci. Quartararo secured his third pole of the season since the opening rounds at Jerez, after posting a spectacular lap in the final seconds of qualifying. The satellite Yamaha rider denied Miller his career’s second pole position with a lap time of 1m31.315s, beating the Pramac Ducati rider by just 0.222s. Meanwhile, title contender Joan Mir of Suzuki starts at P14 after failing to improve his time in Q1. The Le Mans circuit also saw 5000 MotoGP fans in attendance whilst maintaining COVID-19 protocols, becoming the first MotoGP weekend this season to open doors for spectators.

You reckon he’s pleased with the front row? #FrenchGP ???????? pic.twitter.com/VKXym21fLm

The qualifying session was delayed due to an oil spill caused by Tech 3 KTM rider Miguel Oliveira’s crash during FP4 earlier in the day. When the session finally started, Yamaha was topping the time sheets continuing the momentum from FP3 and FP4, with Petronas SRT rider Franco Morbidelli setting the early pace with a lap time of 1m32.393s. However, teammate Quartararo was quick to beat the time posting a 1m31.679s, which he further improved to 1m31.665s on the next lap.

Pramac Ducati’s Francesco Bagnaia managed to improve on Morbidelli’s time and was in the provisional front row at the end of Q1, alongside Petrucci. Ducati’s Andrea Dovizioso moved up to second in the final minutes before LCR Honda’s Cal Crutchlow missed out by just 0.021s.

In Q2, Jack Miller was almost certain of clenching the pole with a lap time of 1m31.537s on his final lap. The rider had a sizeable difference over Quartararo’s previous lap time, but the Petronas rider made a last effort in the final seconds to qualify at the front, denying Miller his career’s second pole position. Nevertheless, Miller starts on the front row tomorrow followed by Petrucci, who secured his best qualifying of the season so far.

Crutchlow showed impressive progress despite his injuries and was quite the surprise in the qualifying session. The British rider starts in the second row tomorrow at fourth, alongside Maverick Vinales on the factory Yamaha and Dovizioso. Despite the early spark, Bagnaia dropped to seventh on the grid, ahead of KTM’s Pol Espargaro and Avintia Ducati’s Johann Zarco. Valentino Rossi on the second factory Yamaha starts in 10th place, ahead of early pacesetters Morbidelli and Oliveira.

Joan Mir struggled through the day after a crash in FP3 that left him stranded in Q1. The rider did show incredible improvement in Q2 but was far off the leaders with a lap time of 1m32.187s. Starting 14th behind LCR’s Takaaki Nakagami, Mir secured his worst qualifying of the season so far. However, we could see a turnaround in the race tomorrow.

Starting behind Mir is Aleix Espargaro on the Ducati, and Suzuki teammate Alex Rins in 16th place, who suffered a crash in FP4. The last spots have been taken up by KTM’s Brad Binder, Tech 3’s Iker Lecuona and Honda riders Stefan Bradl and Alex Marquez. Tito Rabat on the Avintia Ducati starts at the end of the grid.

Samsung Galaxy E02 support page is now live in India, suggesting that the phone could make its debut in the country soon. The...
Read more

Samsung Galaxy E02 support page is now live in India, suggesting that the phone could make its debut in the country soon. The...
Read more
Load more