The Audi Q2 will be launched in India on October 16, 2020 just in time for the festive season.

The Audi Q2 is finally set to launch in India a full 4 years after it was first unveiled globally. Its been a long time coming and the lockdown delayed the arrival just a wee bit more. But what better time than the festive season to launch a car that promises to do wonders for the brand in the market. It is Audi’s 5th launch this year in India and definitely the most significant. It is also Audi’s smallest and most affordable SUV yet and that sounds like a perfect recipe for success in a market like ours. 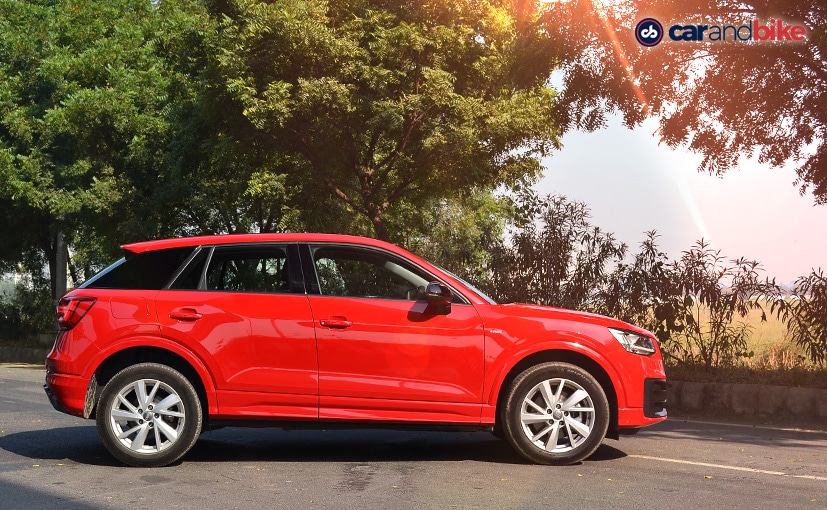 The Q2 is not exactly tall and feels more like a crossover than an SUV.

The Q2 has just been given a facelift internationally but what India gets is the pre-facelift version of the car and we are happy to say here that it does not belong to that era when Audis looked similar. To jog your memory, the idea behind that of course was to make the cars from the brand more recognizable in newer and emerging markets like India and we get that. However, exclusivity was the need of the hour and Audi jumped on that bandwagon and  the Q2 and the A8 were some of the cars to benefoit from this move. It is just about 4.2 meters long and 1.5 meters tall which means it’s shorter on both fronts than most compact SUVs sold in the market. However ,at 1.8 meters the Q2 is quite wide and that gives it its imposing stance. 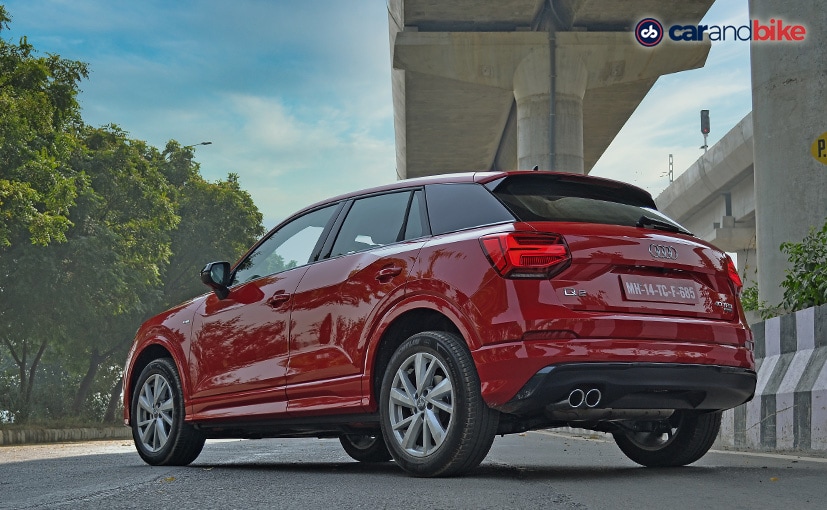 The imposing stance of the Q2 comes out the best when looked at from the rear.

The Q2 is indeed a breath of fresh air when it comes to design. Not subtle or understated as earlier SUVs from the brand but not flashy either. It’s something in between which makes it stand out and helping it do that are the T-shaped headlights and a similar pattern for the taillights. On the profile the bulging wheel arches and the unique positioning of the side view mirrors, which are finished in black, add to the style quotient. A special mention has to be made of the contours on the doors which look like the work of a sculptor. 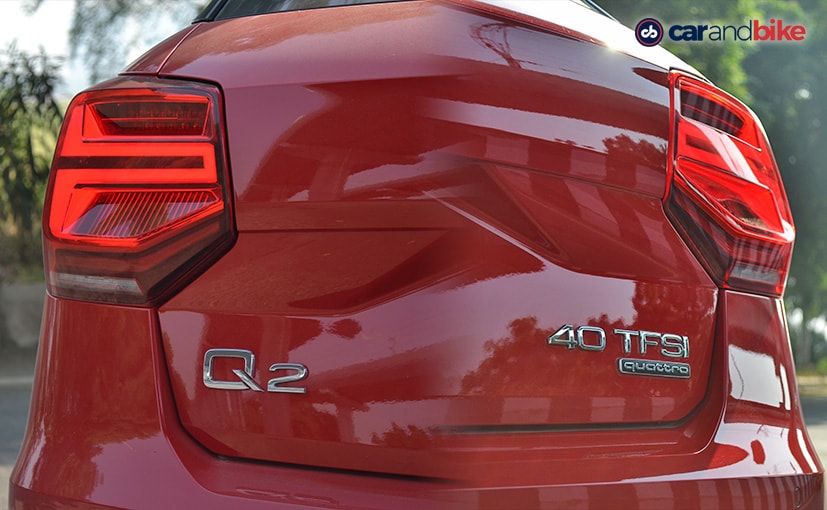 Many sharp edges at different parts of the car are a design highlight.

However, the design of the 17 inch V-spoke alloys could have been more appealing and the big black C pillar doesn’t look in sync with the overall aesthetics of the car. In comparison to the front, the rear is more likeable with the many sharp edges, skid plates and dual exhausts. The Q2 certainly looks more appealing in this S-line exterior with black styling package. 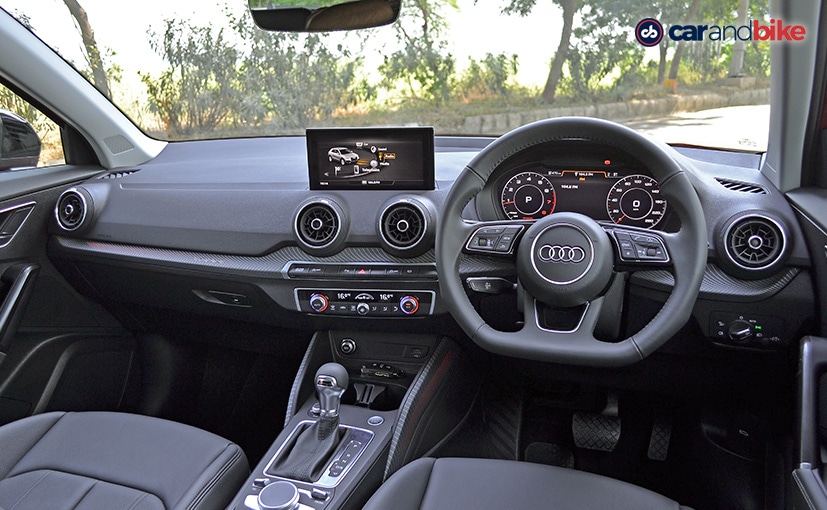 For an entry-level offering the cabin of the Q2 feels quite premium.

Step in and the design somewhat compliments the nice looking exteriors. An all-black cabin awaits you here and despite that it doesn’t really feel cramped for space. The features on the car are something which we’ve seen on earlier models. So, there’s the virtual cockpit with day/night mode which you can customise the way you like. And then there’s the Audi Multimedia interface that comes with Navigation plus. It also gets Android Auto and Apple car play connectivity. What I really liked is the premium finish. For an entry level model it is right up there when it comes to quality; be it the knobs or dials, the leather wrapped flat-bottom steering wheel and the front sport seats with leather upholstery.  It’s all top notch! 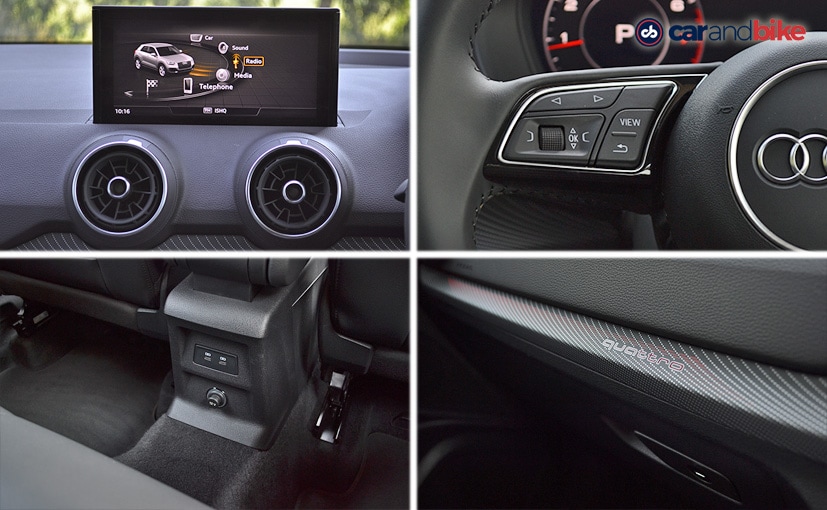 While a touchscreen and rear AC vents are missing, the car gets a virtual cockpit and a nice snake-skin like pattern on the dash.

But what really disappoints you is that even the driver seat is not electrically adjustable and there’s no touchscreen here.  The MMi interface looks dated and just does not match the otherwise youthful appeal of the cabin. Remember this is a car that is few years old in Europe. Thankfully there’s a wireless charger, a 10 speaker 180 watt sound system and a sunroof on offer. But my favourites are the snake-skin like effect on the dash with quattro badging  and the click to shut rotary AC vents which is reminiscent of iconic Audi cars like the TT and even the flat-bottomed steering wheel. 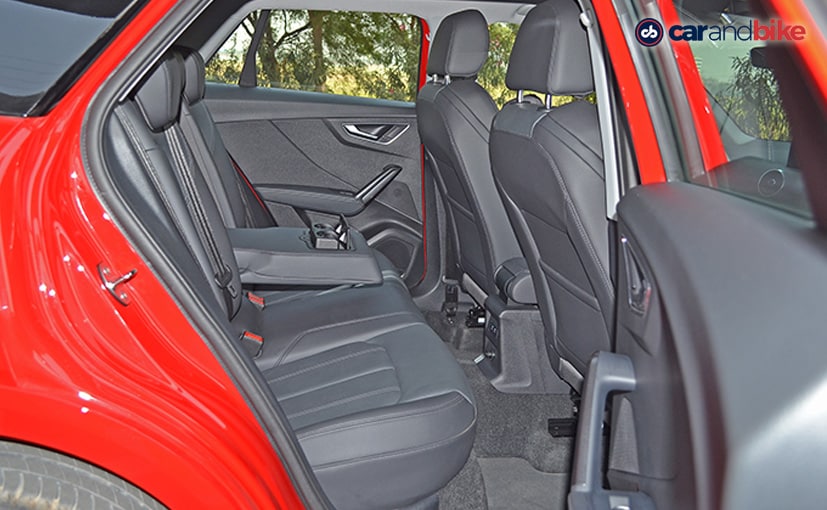 For a car that is just 4.2 meters long, the second row offers good space.

For a car that’s just 4.2 metres long, the second row is surprisingly good on space. On the second row a 6-footer like me got enough knee room and head room. Though I still have complaints when it comes to having adequate thigh support. I also am cribbing here about the back rest and it is a bit upright and you may not like that for long journeys. Increasingly automobile manufacturers are providing type C charging slots specially in the luxury segment. The Q2 gets 2 of them and a 12V socket on the second row while there are no AC vents here. The good thing is that even the middle passenger gets an adjustable headrest and a 3-point seat belt, though the big transmission tunnel might be bit of a bother. 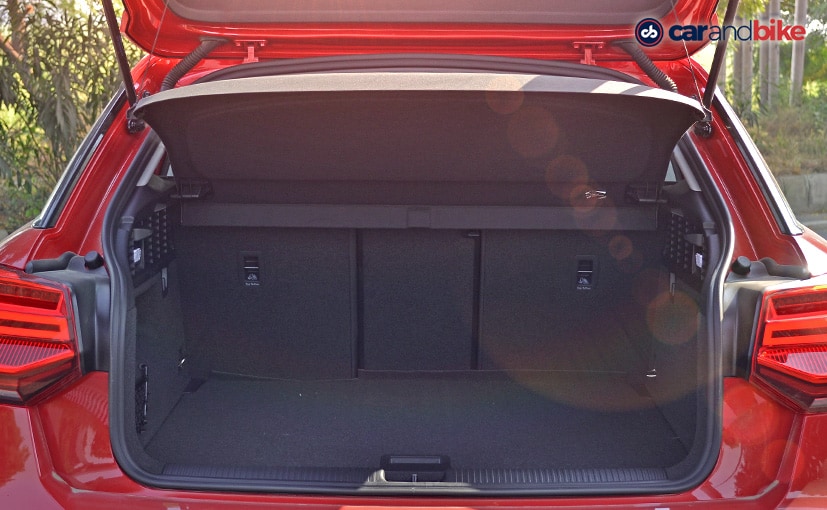 The Q2 gets 405 litres of boot space along with a space saver spare tyre.

How Does It Drive? 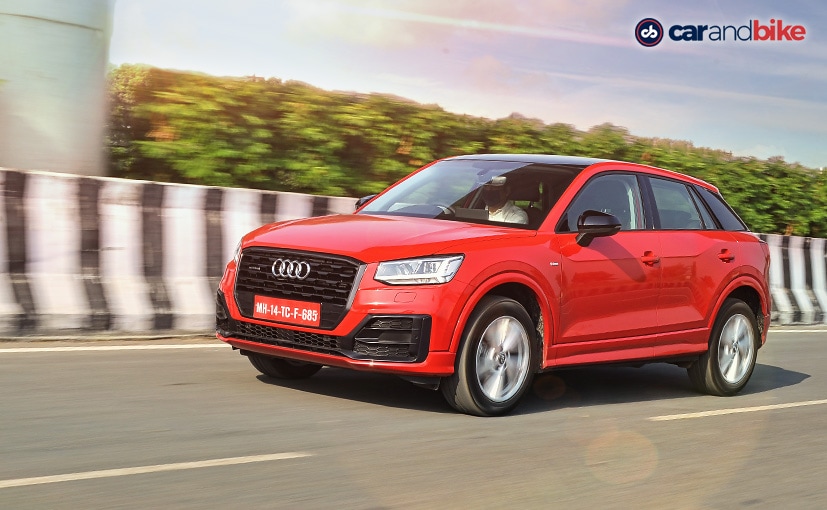 The Q2 is a lightweight car sitting on a big, powerful engine.

The first thing you notice as you start driving the Q2 is that the A-pillar is quite slim and that surely helps once you’re out on the road. The seating too is quite high, something that will work in your favour if you’re not very tall. It has come to India with just one engine option. This 2.0 litre 4-cylinder turbo petrol engine does its duty on so many cars from Audi, Skoda and Volkswagen that you’ll almost lose count. For its size and weight the Q2 benefits from this engine as it guarantees quite a peppy drive. Audi claims a 0-100 kmph time of 6.5 seconds which is brisk. 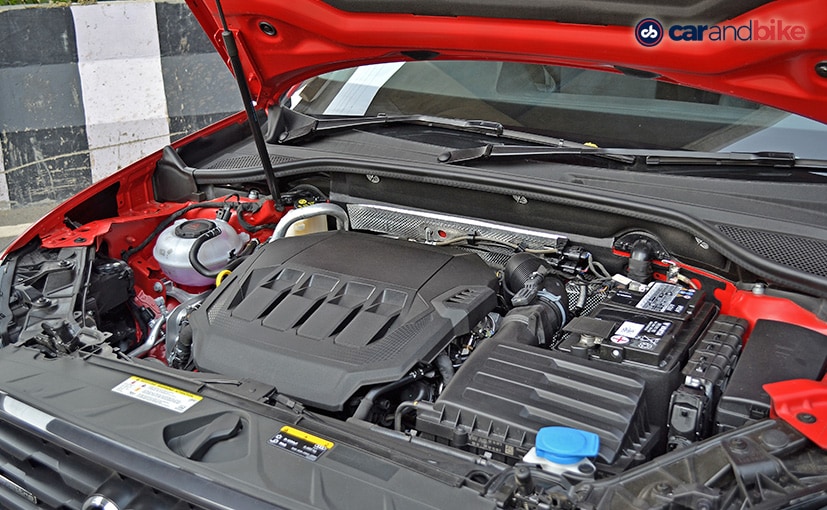 The Q2 has come to India with just one Turbo Petrol engine option.

The 190  bhp and 320 Nm torque which kicks in at 1,500 rpm is what’s on offer. If you know this engine you will vouch for its silence and refinement. A 7-DSG gearbox with paddle shifters makes your drive experience more engaging and considering there’s no manual transmission on offer, you definitely needed this. It’s responsive and that’s why you love sitting behind the wheel. Having said that the downshifts are not in the same league as the upshifts. That said, the shifts are smooth and you put your foot down and see the world whizz past. Then there’s the all-wheel drive quattro system, which sends power to all the four wheels and that’s also one reason for its sub 7 second time to 100 kmph. As the Q2 takes to the bad roads which SUVs like to do, there’s enough and more traction on offer to help make those difficult maneuvers. However the MQB platform ensures a transverse layout of the engine which means the quattro will not be as lethal or balanced as it is in bigger Audi cars. 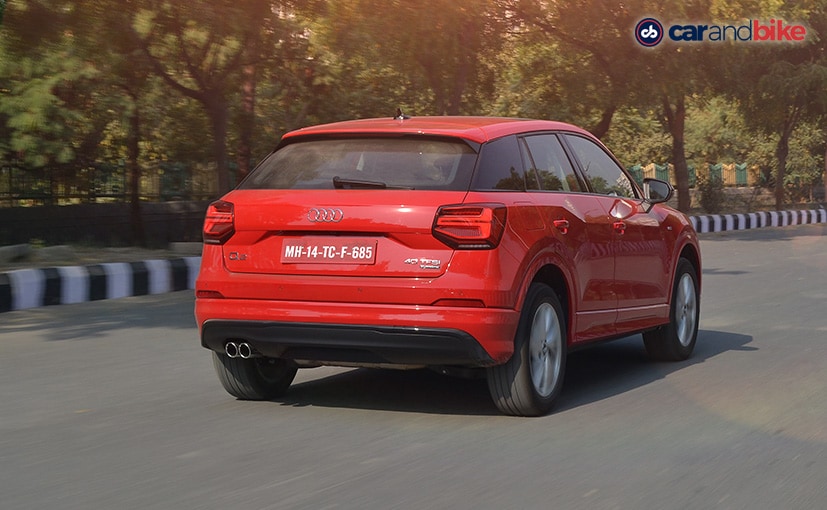 The are 5 driving modes to choose from including an Individual mode.

The Q2 rolls a bit but surprisingly only when you’re taking corners. The steering can surely provide better feedback. On straight roads though, it doesn’t shake your confidence at all and the faster you go the more stable the car gets. The taught dimensions and the wide track come into play here. The suspension does the job of taking on the bad roads quite well, that’s good because at lower speeds its stiffness somewhat bothers you but again at higher speeds it’s fantastic. And this is where Audi drive select comes into play. There are Comfort, Efficiency, Dynamic, Auto and Individual options to choose from and the character of the car changes quite a bit when you switch between them. 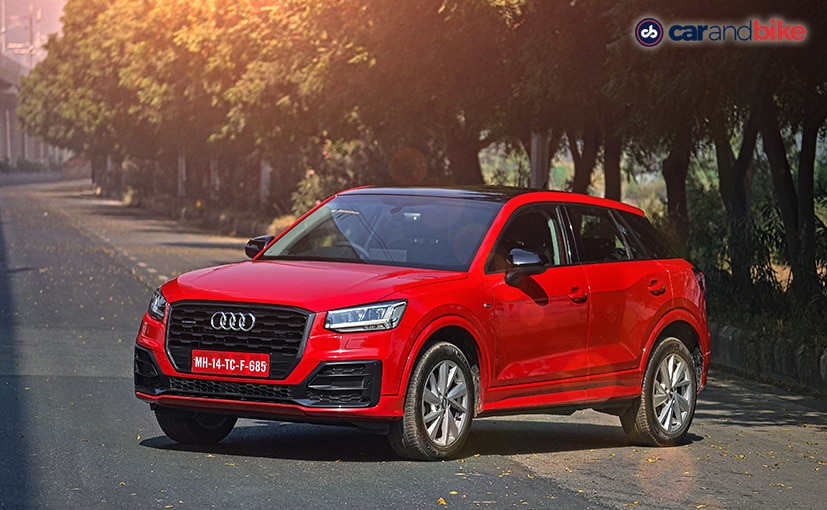 The pre-facelift model of the Q2 has made its way to India.

The Q2 comes with the sort of versatility that can appeal to different kind of buyers in a market like India. It’s biggest USP is that is loaded with fun factor and there’s no doubt that if you love to drive this car will hardly disappoint you. Then there are the attractive looks which makes it looks youngest along with smallest in the portfolio, even though it was made almost half a decade ago. The cabin too is surprisingly premium and spacious albeit not feature rich. 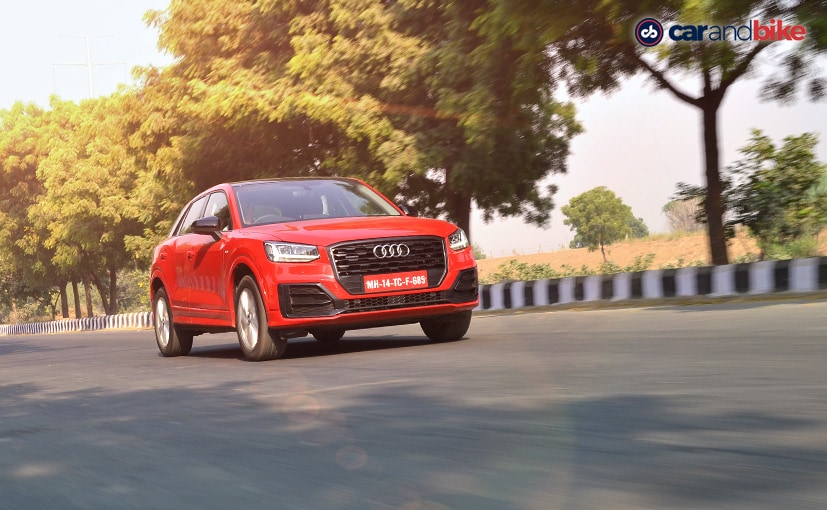 The Q2 is expected to be priced upwards of ₹ 30 lakh (ex-showroom).

It comes to India as a CBU (Completely built unit) which means all your dreams of a really attractive pricing are already dashed. We expect it to be priced above ₹ 30 lakh (ex-showroom) which is much more than other SUVs from the VW family like the VW T-roc and Skoda Karoq which are built on the same platform. While internationally the Q2 rivals the BMW X1 and even the Mercedes-Benz GLA, it doesn’t have any real rivals yet in India in terms of price point. We say this because Audi has the Q3 in India to take on both those rivals, so the Q2 will be priced on the lower side.  We are certain that the Q2 will give Audi’s portfolio the much needed boost, and it will show when the SUV rakes in the sales. It will be interesting to see then, how Audi plays its cards as from where we stand, it has an ace up its sleeve!

WhatsApp's most controversial privacy update deadline is here, and you will either have to accept it or risk losing all the key WhatsApp features,...
Read more
Load more